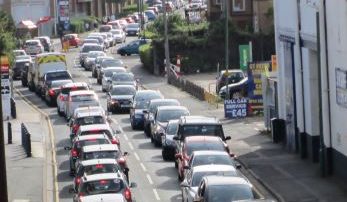 At July’s Maidstone Borough Council meeting local Green campaigner, Stuart Jeffery, asked whether the Council had adopted powers to enforce the switching off of engines while cars are stationary as other councils such as Newcastle, Haringey and Nottingham have done. The Council responded that the legislation was ‘impractical’. Maidstone Greens have called on them to end their complacency and to take air pollution seriously.

Stuart Jeffery, Maidstone Green Party: “This is simply unacceptable and smacks of complacency. Air pollution is a real threat to public health and Maidstone has the 5th worst air pollution in the country outside London and the council is simply not serious about tackling it.

“The councils plans are clearly lacking in effect or grip. There are people regularly idling outside schools, at junctions and in traffic jams. There is simply no need for this. It is illegal for them to do so and it is harming people’s health.

“The council must reflect on its failure to act and must put into place measures to stop this illegal pollution. If it can’t work out how to do this then it needs to ask councils that have managed it to help them.”

Stuart’s question to the council meeting: “Given the Council’s stated ‘Anti Idling Campaign’, has the Council adopted the powers provided by Regulation 12 of The Road Traffic (Vehicle Emissions) (Fixed Penalty) (England) Regulations 2002 to enforce the switching off of engines when vehicles are stationary on the road?”

One thought on “Maidstone Borough Council: Complacent about enforcing the air pollution laws”