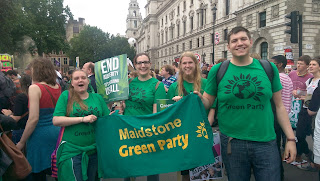 Maidstone Greens joined this week's anti-austerity protest in London. The protest saw 250,000 people marching against the government slashing support to the most vulnerable members in society and their cuts to public services. The Greens have called for an end to tax avoidance, plus a wealth tax and a tax on bank transactions to ensure that public services can be maintained and so the poorer members of society can be supported.

Hannah Patton, Maidstone Green Party: "It was incredibly inspiring to participate in such a well organised event in aid of such a good cause and the speeches in parliament square where very thought provoking and rousing. It was a truly peaceful protest with no trouble or incidents.

"We had the opportunity to meet and March with Green Party members and supporters from all over the county and even the Swedish Green Party. It was great to have so many organisations, groups and unions marching for a common goal."