38 Degrees activists campaigning in Week St  against the Transatlantic Trade and Investment Partnership (TTIP) today were joined by local Green Party members. The Green Party is the only party opposing TTIP which will allow US companies to sue the UK Government using US law. Stuart Jeffery, Secretary of Maidstone Green Party and Fant Ward Candidate and Hannah Patton, former Green Party Parliamentary Candidate for Maidstone met with campaigners to support the action.

Stuart Jeffery, Secretary of Maidstone Green Party and Fant Ward Candidate: "TTIP will be a disaster for democracy, environment protection, workplace law and will ensure that the remainder of our public services are privatised.

"The US laws on the environment and and worker protection are far more lax than the UK laws yet TTIP will allow US companies to sue our government using US laws. This is already happening in Australia which has signed a similar deal.

"The Green Party is the only party opposed to TTIP and we have been campaigning alongside 38 Degrees to stop this deal." 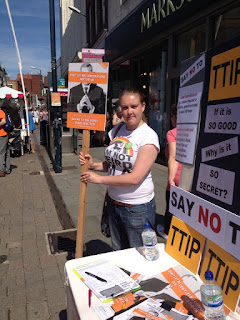 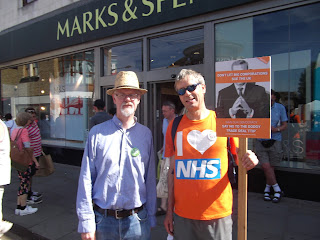